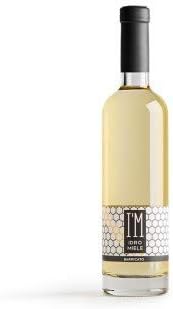 This Italian mead is an interesting, lightly sparking drink fermented from a blend of three floral honeys: Acacia, Stachys and Sunflower. It is fermented over 15 months, which gives it a complex mix of flavours.

I’M IdroMiele is produced by Azienda Agricola Giorgio Poeta in Fabriano in the Italian region of the Marche. This producer appears to sell an acacia honey spiced with star anise, a honey aged in oak barrels named “Il Carato” (The Carat) and also a “Grand Cru” version of the latter — only in Italy!

The version I have appears to be “barricato” (aged in oak), so tasting notes might be different if it is possible to source a version that is not oak aged.

A pale gold with a overture of effervescence when freshly opened.

A slight floral hint with notes of olive oil. This is perhaps olfactorily cliché given the mead’s Italian origin, but there is a genuine nose reminiscent of olives.

An initial onset of muted sweetness accompanied with peaches and pineapple, leading away to a dryness that lingers — perhaps even a tartness and texture akin to an under-sweetened lemon curd.